Hi, I’m Matt. This is my career story. I went from Team Member to Vice President at The Saxton Group. You can too.

I attended college in a small town in Oklahoma. Like a lot of students, I took a part-time job to make extra money while I was going to school. Back then, I didn’t think too much about my career. I wanted a job that was fun, allowed me to interact with people and was flexible with my class schedule. I ended up finding all of that – and a lot more – at McAlister’s Deli.

I was hired by The Saxton Group to be a front of house Team Member at the local McAlister’s. I quickly learned that McAlister’s was different than other places where I had worked. The managers genuinely were interested in me. Many of the people I interacted with who were managers or Regional Directors or even Vice Presidents had started as  Team Members in the restaurants – just like me. It didn’t take me very long to realize this might turn out to be more than a part-time job.

That was almost 15 years ago! Along the way I worked every position in the restaurant, from that first job as Team Member to my current role as a Vice President. I learned that if you work hard, make a difference and have a genuine passion for others, doors will likely open for you. Today, one of my main responsibilities is to help create a culture at The Saxton Group where we celebrate our people and provide opportunities for advancement. Luckily, we’re growing faster than ever which has allowed us to advance more careers than ever before.

That’s my story, apply today and let’s get started on yours. 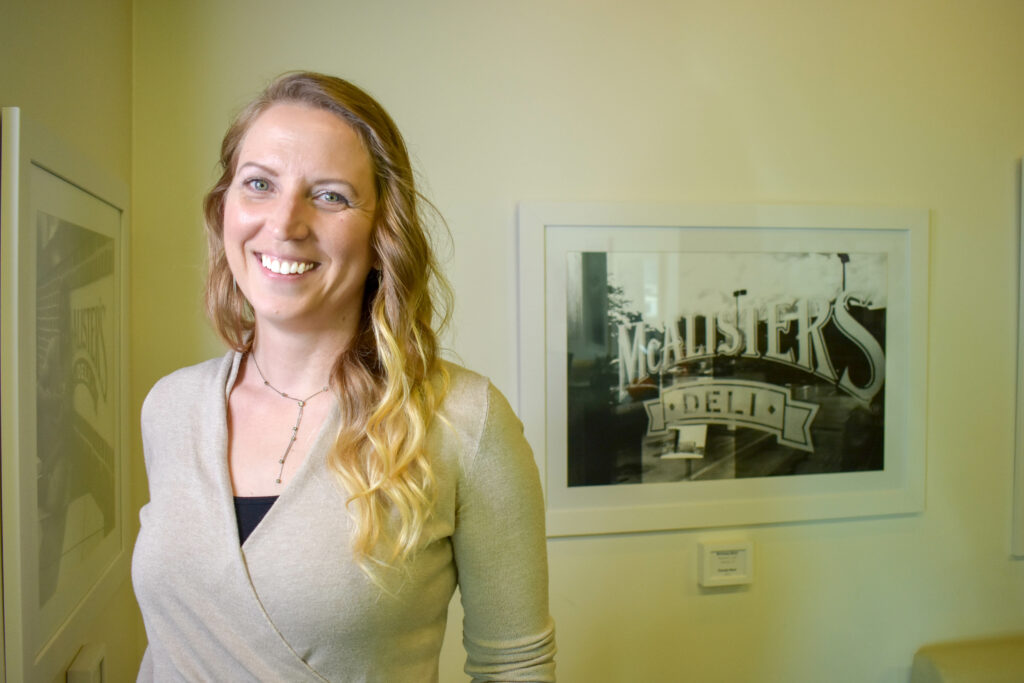 My name is Michelle, Regional Director for the Central Texas area. Before joining The Saxton Group, I had been working in the restaurant industry for over 13 years. It had always been my passion to serve others and, knowing that I was a “lifer” in the restaurant industry, I chose to forego a secondary education. Realizing this, my goal was to find a people-focused company that valued their people as much as I did. I soon found that this was difficult and, in fact, seemed impossible at times.

But then I found The Saxton Group. In 2008, I was hired as an Assistant Manager for McAlister’s Deli and trained in College Station, Texas, with Killeen, Texas as my home restaurant. I quickly learned that working for The Saxton Group was one of the best decisions of my life. I was surrounded by people who inspired, challenged, encouraged, and, above all, believed in me. Since joining The Saxton Group, I have worked my way up from Assistant Manager, to General Manager, and, now, to the position of Regional Director. I am successful today because The Saxton Group has provided me with the environment and tools I needed to stay committed to my development. Throughout my time with The Saxton Group, my goal has always been to develop people and lead my team to success, just like others did for me.

I’m proud to work for a Company whose values remain in line with mine. While The Saxton Group continues to grow and adapt, I know it will never sacrifice on its true passion: people.

My name is Raymond, Ray for short, and I am from Killeen, Texas, a small military town in central Texas. Being from a small town, I wasn’t sure what I was going to do with my life and career. But I was given an opportunity to join The Saxton Group in 2011. Since joining the team, I’ve experienced numerous Free Tea Days, plenty of training and development, and had the opportunity to be a part of a New Store Opening team! I started from the bottom and, along the way, was able to successfully accomplish and master every position: from the sandwich line to my current position as General Manager of the McAlister’s Deli of Waco, Texas. Through hard work and dedication, anything is possible at The Saxton Group. I am grateful that I was given an opportunity to be a part of this great Company! Thanks for everything, TSG!

Over 60% of our Management Team was promoted from within. Will you be one of them?

We operate in 3 states
throughout the south central US.